How to create a fluent interface in C#

UPDATE: If you want to build a fluent interface, but don’t want to follow the manual process, I’ve created a free program you can download and use to create your own fluent interfaces. Read about it here: https://www.scottlilly.com/fluent-interface-creator/

What is a fluent interface?

Have you ever seen a cool-looking series of method calls that almost reads like natural language? Something like this:

That’s called a fluent interface, and it has some practical advantages, other than just looking nice.

Why create a fluent interface?

I always like to start with the “why”, to make sure the final solution actually solves a problem.

Fluent interfaces have two main things they try to solve.

First, they make the code more readable, and easy to understand. This makes it easier to make changes later on.

Second, they can be used to force the programmer to perform certain steps before they perform others. This can be a problem with some object oriented programming. An object can have a method that uses data it expects to have been set in another method. However, it doesn’t force the programmer to call the first method – it’s just something that all the developers are supposed to know.

With a properly-written fluent interface, you can enforce “rules of grammar”, and make it so certain methods cannot be called, until all the required setup methods have been called.

Steps to build a fluent interface

There are three steps I use to create a fluent interface. They are:

If all that doesn’t make sense, right now, don’t panic. I’m going to go through it slowly, and give lots of code samples.

All you need to do here is write down the possible combinations you want to use in your fluent interface.

For this example, I’m going to show how to build an object for deleting rows from a SQL database.

The reason to use a fluent interface for this is to ensure the developer includes at least one WHERE condition, or explicitly states that they want to delete all the rows in the table.

If you’ve been writing database code for any length of time, you’ve probably heard of at least one developer who wrote a delete query, and forgot to include a WHERE clause, causing all the rows to accidentally be deleted. You may even be that developer (most of us have done that, at some point).

For this sample, we’re not going to build a complete delete query object. There’s a huge amount of code I’d need to write for that. We’ll just cover the basics, so you get an idea of how a fluent interface would work in a “real-world” example.

Here are the types of statements I want to handle:

This covers the basic deletes I want to be able to perform. A delete of all rows in the table, and a delete with one or more WHERE conditions that check if a column is either equal to, or not equal to, a passed value.

Now we need to break apart the syntax. I use the acronym ICE to identify the different types of methods. That stands for:

These are the methods we use to start the call. Here, we only have one, DeleteRowsFrom(table).

These are the methods we call in the middle of the statement, and that let us call another method after them. Here, we have Where(column), IsEqualTo(value), and IsNotEqualTo(value). When any of these methods are called, you can keep on calling other methods. That’s known as “method chaining”.

These are the methods that finally do some action, and end our statement –  AllRows() and RunNow().

Now that we know all the parts, and how we want to use them, we can define the grammar our fluent interface will use.

Before going into how to add grammar to our fluent interface, I’m going to tell you why you need to do this. And in order to do that, I need to show you a bit about method chaining.

Method chaining is just calling one method immediately after, and in the same line of code, you’ve called another method.

For example, you can write some code like this:

Or, you can put that all in one line, like this:

They both do the same thing.

The reason you can put all that code on one line is because each method returns an object, in this case, a string. And string objects have methods you can call on them. So, you can keep calling methods. This is “method chaining”.

With our fluent interface, we go a little farther. Not only does each method (other than the Executing methods) return an object of the same type, it actually returns the exact same object. So, when you call one method, and it does whatever it needs to do with the object, it ends with a “return this;”, to pass the now-modified object back along the chain.

With the SQL delete class we’re building, we could have each method return the SQL delete object. If we did that, our class would look something like this:

Notice that every “chaining” method returns an instance of the DeleteQueryWithoutGrammar object. This is what lets you keep calling the other public methods of the class.

However, there’s a problem. The way this is currently written, you could call things out of order, or not call some methods that may be required.

For example, this code would compile perfectly, yet fail to run:

This is why we need to add the grammar rules. We do that with class interfaces.

Before creating the interfaces, we need to define our rules of grammar – when the different methods are allowed to be called. So, with this class, we want to have rules like, you can only call IsEqualTo(value) immediately after a call to Where(column).

I do this by building a table like the one below. 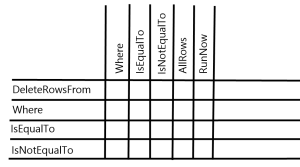 Now, we go through each row and mark which methods in the columns can be called after calling the method for the row. 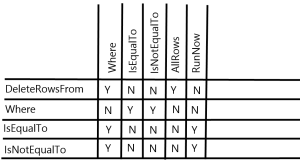 We need a class interface for each different set of rules. In this case, IsEqualTo and IsNotEqualTo both allow the same methods to be called after them, so they can use the same interface. 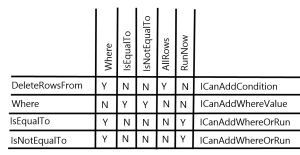 Now we know what grammar we want to allow, and we’re ready to create our class interfaces.

Step 3 – Build the class that implements the interfaces

All that’s left is to have the DeleteQuery class implement the interfaces, and have the methods return the correct datatypes. I normally create the interfaces first, then the class. However, for this post, I wanted to show how method chaining works.

Here is what the class looks like with the changes.

Notice on line 6 that we state this class implements the interfaces we created. That lets us return this object, cast as an object the interface datatype. By doing this, the developer only has access to the methods listed in the interface.

So, on line 30, when the Where method does its “return this;”, the object is returned as an object whose datatype is ICanAddWhereValue. The only methods available for the developer to use in the method chain are the ones listed in ICanAddWhereValue – in this case the IsEqualTo(value) and IsNotEqualTo(value) methods.

That’s how to have the rules of grammar enforced. With it, we can be sure that the delete query has everything we need to build it properly, once an executing method is called.

It takes a bit of planning and work, so you probably don’t want to build a fluent interface for everything. I find them useful for code I put into a library for re-use, or to give to other programmers. With a fluent interface, IntelliSense handles many of the “how do I use this” questions, that no one ever bothers to look in the documentation for.

I’ve also put the source code up on GitHub at https://gist.github.com/ScottLilly/6976156.

Update 04 October 2016: I started to build a tool to help create fluent interfaces. The code is at: https://github.com/ScottLilly/FluentInterfaceCreator. I hope to complete it by the end of this month (October).