Using Data To Improve My Productivity

Becoming more productive is an idea that’s always been in fashion.  But now, thanks to near-ubiquitous computers, we have new ways to ‘improve’ our productivity.

However, I’ve been looking at productivity in a different way than it’s traditionally been viewed.

Normally, we assume that productivity is about how to get the most out of the hours we’re in the office.  I’m looking at it from the angle of only “being in the office” when I’m productive – and how to trigger more times when I am productive.

This isn’t a completely original idea.  But I figured I’d share how I’m doing it.

I wrote a program called Time Logger.  What this program does is quickly let me record when I start, and stop, working on something.

I’ve been using it for several weeks, although not for 100% of the things I do (although I’m now starting to use it for all my work).

The initial idea was for me to see how much time I was putting into projects, and comparing that with how much money I was making from them.  However, with the data I have, I realized I could do much more than that.

Over the last couple of days, I created some new reports.

What time of day am I productive?

The first report shows me how often I’ve worked during each 15 minute segment of the day. 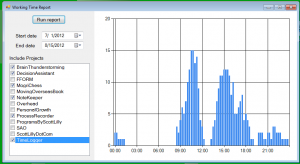 With this report, I can see what time I am most likely to be working.  That’s probably the time I have the most energy, or focus, available.

Now that I know this, I may try things like having a snack, meditating, or taking a short walk, around that time.  That might let me have another peak in the afternoon.

Once I change my routine, I can run the report for the new time period and see if that increased my time worked.

What day of the week am I productive?

A similar report shows me how many hours I’ve worked (on average) per day of the week. 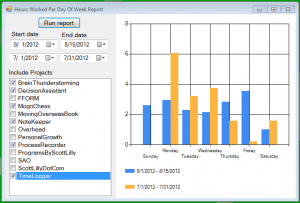 This report shows that, in July (the orange bars), I put in a lot more hours on Monday, but generally tapered off as the week progressed.  For the first two weeks of August (the blue bars), I’ve been more consistent about the number of hours I work per day, although not necessarily more productive per week.

As I make changes to my habits, I can see if they lead to me being able to work more hours per week.

How much time do I work per session?

As a programmer, I need to focus.

Unfortunately, I can’t focus non-stop for hours at a time.  Yet, most companies want us sitting at a desk, 8 hours in a row (except for lunch).  So I created a report to show me how many minutes I usually work on a task. 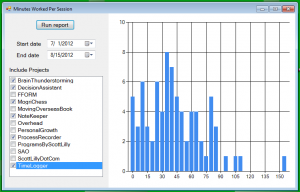 This graph shows that the average (mode) length of time I work is 35 minutes per session.

I might use that information to set up a timer.  When I start a task, have it alert me after I’ve been working for 35 minutes.  That might be a good time for me to take a brief break and rebuild my focus.

What all this information means

By themselves, these graphs don’t mean much.

However, now that I have a way to record the data, I can start experimenting with how I work.  Ideally, these experiments will let me create the largest amount of output, with the most concentrated effort.

If you, or someone you know, would like to try out the Windows TimeLogger program (for free), please let me know.  I’d like to hear other ideas on how to use it.