Last August, I built this computer for programming and gaming.

To separate my games and personal apps from my programming environment, I used VMWare Workstation to create virtual machines (VMs) for programming. However, VMs are sometimes a little slower and have other random problems.

So, I decided to build this new computer – only for programming.

I wanted to build something small enough to easily transport to a client’s office or a meetup. That led to a Mini-ITX motherboard and a small case. It needed to be fast, since it will be for development, so I wanted the latest-generation CPU and a fast hard disk. It didn’t need powerful graphics, but it would be nice to have the option add a video card in the future.

I also wanted it to be silent. My older computer is quiet, until the video card fans start. They aren’t extremely loud; however, they are loud enough that you’ll hear them in an audio recording. To block the noise, I had to place the computer under my desk, which has no air circulation. I wanted a computer quiet enough to have on my desktop while recording audio.

With those requirements, I started looking at parts.

The first problem I ran into was the case. A small case sounds like a good idea, until you need to put everything inside it. Personally, I don’t want to spend my time scraping my knuckles inside a computer case – I just want to get a running computer.

After a bit of frustration with a small case, I ordered a roomier case – the Fractal Design Nano S. It’s a little bigger than the first case I tried, but it is 100% easier to work with.

You might notice that I got the 6700K, which is overclockable, but an H170 motherboard, which doesn’t support overclocking. There are a couple reasons for this.

First, I’m not really into overclocking. This computer is fast enough for what I need it to do, without any overclocking.

I used the Gigabyte H170N-WiFi. If you get the 6700K, and want to overclock it, you could go with the a Z170 board. However, most of the Z170 boards I saw either had lots of problems reported about them, cost significantly more money, or didn’t have some of the other features I wanted built-in (like built-in WiFi).

For my purposes, this seemed to be the best choice.

The motherboard only supports two RAM sticks, with a maximum of32 GB. That should be more than enough to work with, even when simultaneously running Visual Studio, SQL Server Management Studio, and other programming tools. So, I got this: 32 GB G. Skill Ripjaws DDR4-2133

Because the original plan was to fit into a small case, I wanted a low-profile CPU fan that was quiet. The Noctua Low-Profile Quiet CPU Cooler got good reviews, so I got it. With the Fractal case, I could fit a larger CPU cooler, but this is working well so far.

If you get a larger CPU cooler, remember that you’re working with a small motherboard.  You might run into a problem with clearing the RAM, or the USB port connector, which are both very close to the CPU.

I love the speed of the PCI-Express SSD in my last computer, so I got the Samsung 950 Pro M.2 512GB PCI-Express 3.0 Internal SSD for this build. The motherboard will boot off this drive, and it’s large enough for everything I’ll need.

If I need more storage, I’ll add in a SATA SSD. There are plenty of connectors available, and plenty of places to mount it on the case.

With the ECO mode switched on, and the insulated case, I haven’t heard any fan noise.

This is probably my favorite piece from this build, the Fractal Design Nano S case. The sound-dampening of this case is so good, I can’t even tell the computer is on.

I’m even going to move my old computer into the larger version of this case.

It’s easy to work with. It has lots of screws, tie-downs, etc. It even came with a case fan splitter. You’ll need that because the motherboard only has pins for a single case fan, and the case comes with two fans (one in the front, one in the back).

I got the version without the windowed side panel. If you like to see inside your computer, you can get a version of the case with a window panel. 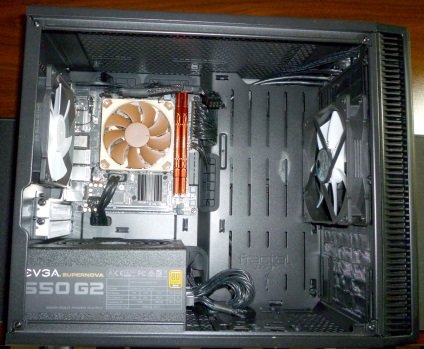 There weren’t many parts, so the installation went quickly.

The SSD plugs into the back of the motherboard, and the front only needs the RAM, CPU and CPU cooler. The CPU cooler has clearance between it and the RAM.

It’s easy to run the cables behind the panel where the motherboard is mounted. If you want to install a video card (up to 315 mm long), extra hard drives, or a water cooler system, there’s plenty of space inside this case.

Once I put the side panels back on, the computer is completely silent.

CPU, RAM, and disk performance seems to be about the same as my 4790K system – which has some minor overclocking, unlike this build.

The total cost was around $1100, without shipping and sales tax.

If you aren’t worried about getting a CPU that is two generations behind, you can probably save around $200-250 by building a computer similar to my other development PC, and you’ll have about the same performance.

The nice thing about this equipment is that I should be able to upgrade only the CPU, as Intel introduces future (faster) versions.

Whatever you build, I really suggest considering the Fractal Design S cases. They feel sturdy, and the sound-dampening is great to have – especially when I’m trying to concentrate while programming.

Let me know if you build a new computer, and what good (and bad) things you encounter.